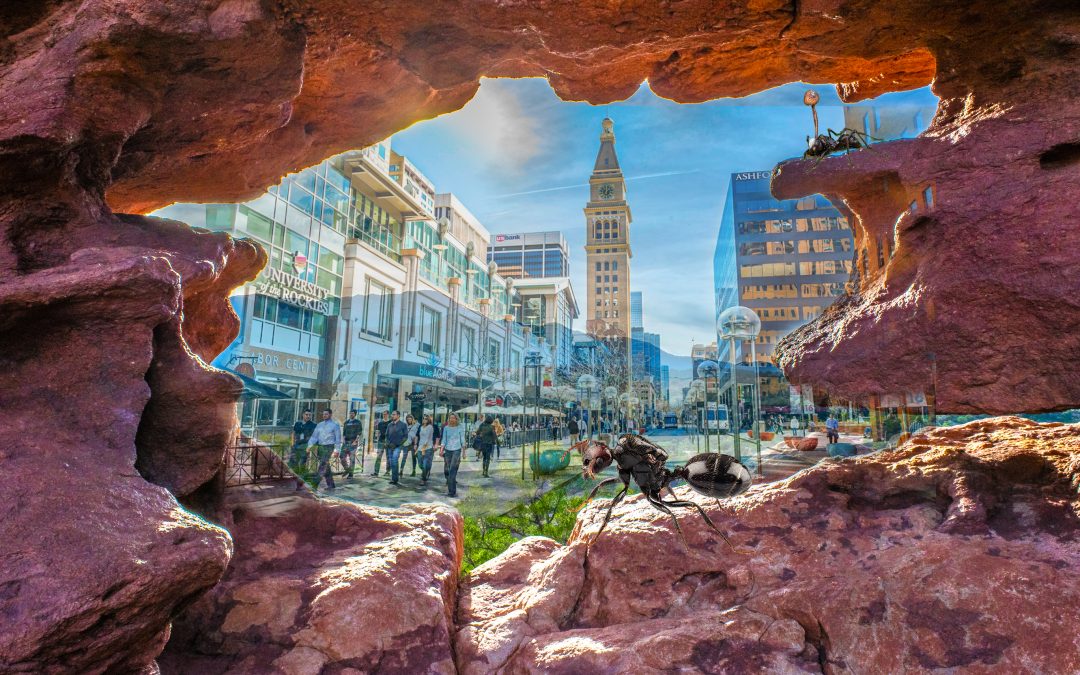 On more and more corners of downtown Denver, Elaine noticed tents. Lots of them. “Has it always been this bad?”

Sam shook her head. “No, I never seen this many homeless here before.”

Walking past Speer, at Colfax and Broadway, Elaine and Sam got swept into a rally.

The demonstration of unwashed, mismatched and downtrodden marched from Civic Center Park to Cheeseman Park carrying makeshift signs and pushing shopping carts. People were about half masked and unmasked. Vaccinations progressed in uneven patterns throughout the country.

A young woman in combat boots, layers of leggings and legwarmers under skirts she held up to make walking easier, burrowed into her patched denim coat, climbed onto a park bench and spoke into a megaphone. “If things keep going like they are, we won’t stay quiet for long. 16th Street in the mile high city is just the tip of the iceberg.”

The mob had congregated outside a suit-dominated city sponsored business function. The Entrepreneurial Finance Forum, designed to help small businesses survive the pandemic aftermath, the fliers outside advertised. Investment firms clamored for attention at the Tivoli Building near the Pepsi Center in Denver.

Sam pulled Elaine inside the glass doors, nodding at the restless, eclectic crowd. “This could get ugly.” She turned on her thousand-watt smile and convinced the guard that they were part of the investment forum, had stepped out for lunch and forgotten their passes.

Booths lined the room representing nearly every bank and credit union in the city of Denver. Counseling sessions were going on, with some of Denver’s best-kept-secret business gurus doling out free tips on how to keep your investments from tanking during the pandemic.

Skirting a heavily perfumed woman in a sleek grey pantsuit counseling a young hipster couple, Elaine overheard her sage advice. “Investing in human capital helps the whole society become stronger and wealthier. Relying on credit can be devastating,” the well-intentioned advisor touted. “Our duty to spend money wisely is no longer just a patriotic gambit, but a global responsibility.”

The Loft on the second floor, an upstairs balcony bistro, offered a view of the whole event for the price of bagels and coffee or wine and cheese. It was scattered with empty tables and chairs. Only a few people were occupying the space. Elaine took a seat while Sam headed to the counter for a toasted blueberry and cappuccinos.

TVs blared from the corners of the small upper-level convention hall café. News reporters from Mumbay warned of the next emerging variant of the virus. “Even as a deadly second wave of Covid-19 ravages India, doctors are now reporting a rash of cases involving a rare infection – also called the ‘black fungus’ – among recovering and recovered Covid-19 patients.”

Elain blinked. Her mind cartwheeled. This is why I hate the news. Vaccines are being pushed out as giveaways, incentivized by free beer and pizza in Chicago, while countries all over the world struggle to get enough vaccines for those who want and need them. America is trying to convince the LCD, via free shwag programs, to protect themselves while the rest of the world struggles with malevolent side effects.

“Mucormycosis is a very rare infection from mucor mold, commonly found in soil, plants, manure, and decaying fruits and vegetables,’ says Dr Akshay Nair, a Mumbai-based eye surgeon, was waiting to operate on a 25-year-old woman who had recovered from a bout of Covid-19 three weeks ago.”

Sam set a cappuccino in front of her and tossed a paper plate with the bottom side of a bagel onto the table while she chewed the last of the top half. “Some scary assed shit, that black fungus.”

At the far end of the convention hall below was a stage upon which the Governor gave a small press conference. As part of his continued focus on Colorado’s economy, he commented “Colorado has a much higher concentration of small businesses than other states, and it’s vital we do all we can to help them survive this global crisis of COVID-19.”

It was a biting cold day outside and the characters onstage reminded Elaine of a scene from the movie Private Eye; a politician surrounded by bodyguards and paparazzi speaking to his admirers and supporters. The constituents who profited from his term in office holding court inside the inner sanctum, the rabble outside out of sight and reach.

“Small businesses are the backbone of Colorado’s economy, and will survive this pandemic …” the Gov said. He eyed the crowd and paused for effect, then raised his fist with an ear-splitting grin and an air punch. “Stronger together!”

The crowd erupted in a clamor of mask muffled roars, foot stomps and pounding fists. An enormous bulb went off as the camera flashed, and a man in a tan trench coat and sand-colored fedora hat ushered the governor backstage.

Matty and Hank parked at the Pepsi Center. Hank texted Sam of their arrival while Matty clipped Toto’s leash to his collar and let him out to water the sidewalk.

“They’re inside the Tivoli, at a café upstairs.” Hank pocketed his phone and fed Toto a piece of beef jerky.

Matty scanned the crowd, his military instincts kicking in. This newly emerging homeless class and the business slowdown that caused it was an awakening. He catalogued and noted bulging pockets and angry stances, the hunched shoulders of desperation encased in old leathers and cast-off military fatigues. The collateral damage of the global shut-down is real.

Matty and Hank wove their way through the homeless sit-in, a demonstration of the huge gap between the ever-widening schism between classes. The angst and frustration hummed and vibrated with increasing intensity the closer they got to the forum.

Matty skipped the line and spoke to the guard, who turned out to be an ex-marine. He let them through the gate, into the political rally with a silent nod.

Toto, the ‘service dog,’ led the way, searching Elaine and Sam out, with his perky ears, waggy tail and soft wet nose.

Hank and Matty emerged from the crowd of flashing bulbs from old school cameras and the silent surveillance of video streaming technology, cutting through drones of snappily dressed ranks of suits and press. Ranks of politicos and business hopefuls, hipster soldiers of the new world order parted.

Elaine sat, mesmerized, stupefied. Caught in the lights, her mouth slack, transfixed by the glow of the TV.

Matty rushed forward, taking the stairs two steps at a time. Hank and Toto right behind him. She’s somewhere else. He recognized the signs now; the vacant stare, zombie glaze to her eyes. Up the stairs he trundled.

The reporter’s voice blared from the overhead TVs in the Loft bistro, “Mumbai’s busy Sion Hospital has reported dozens more cases of the fungal infection. According to Dr Renuka Bradoo, this aggressive infection affects the nose, eye and this leads to the brain.”

“Many of the patients lost an eye, to keep the fungus from attacking the brain, only weeks after recovering from Covid-19. It’s a nightmare inside a pandemic.”

Swoosh, the curtain lifted and emotion flooded her face. Hysterical laughter emerged in warbles and chirps; echoes ricocheted off the polished cement of the balcony bistro. Oh Shit, she’s on the floor.

Sam’s eyes flitted from Elaine, curled up on the polished concrete, tears streaming down her face, head between her knees hiccupping, back to the rapidly approaching Matty. “Hon, your girl either got serious issues or she just saw something that spun her pretty hard into another dimension.”

“Zombie ants,” Elaine said. “Black fungus. I got it. We need to get to Berkley, I gotta talk to the man behind the curtain.”