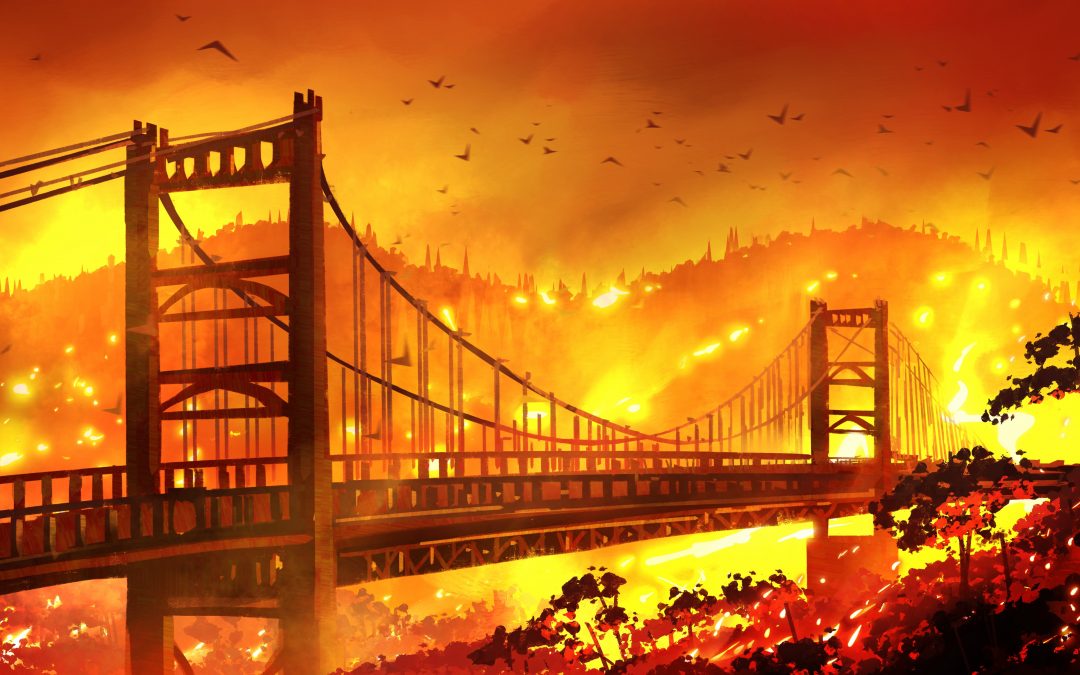 “Denver ain’t got nothing going on compared to this.” Sam said holding her hand over her face, doubling down on her mask. Plumes of smoke erupted from the fires that had been recently doused by the Berkeley Fire Department. She stood outside stretching while they gassed up at the pump on University Avenue, just west of Interstate 80.

Almost exactly where they were, a wall of flames had risen high into the sky the day before. Sam showed them the images of the incident on her phone. It explained why they were driving through what looked like a war zone. “… firefighters put out the blaze quickly and no one was hurt, officials said. It was only the latest of nearly a hundred fires reported in West Berkeley homeless camps in 2020, in stark contrast to the eighteen encampment fires reported elsewhere in town.”

Elaine was stupefied by the homeless encampments. Once they got to the Bay area, almost every single gas station they passed had sleeping scarecrows dressed in rags or panhandling; walking up towards them as soon as they stopped. She hesitated to even get out of the car now. PTSD from the Texas robbery?

Matty finished pumping gas, topping it off. She watched him from the passenger side mirror. His gray tee-shirt pulled in all the right places. She felt heat rising in all her places; blushing, she breathed out so she wouldn’t spontaneously combust.

Neither Sam, nor Hank, had seemed the least bit surprised when they’d both emerged from her room that morning in Tahoe.

Hank had just shot them a grin and said, “There’s coffee made.”

Sam and Elaine sat on the deck, breathing in the Tahoe clean air drinking coffee while Matty and Hank made breakfast.

Matty looked up, caught her watching him and smiled in a way that made his eyes crinkle and her insides melt. Hopping back in the car, he looked at Hank and Sam before turning to Elaine. “Let’s go straight to Berkley so we can make this drop, grab lunch and head out?”

They parked and moved down Shattuck Avenue, spine of the city’s downtown. Walking past hipsters and college kids, coffee shops touting cold brew and craft beer, Elaine looked wistfully in the windows of a bookstore.

Her reflection, walking Toto, reminded her of a flower child from the sixties. She’d saved her flowy skirt for today. Also, it was the only clean thing left in her suitcase. “It would be quicker if we split up,” she said. “I’ll go with you to find this professor and Sam and Hank can grab lunch and to-go’s. We can meet and get back on the road.”

Elaine handed Hank the leash. “I’m pretty sure they’re not going to let Toto into the science unit.”

Leaving Toto with Sam and Hank, Elaine and Matty headed to Berkley University. They walked into the science building with a silver suitcase containing the last of the bio samples.

Entering the building, Elaine went to the info desk. “Is Dr. Phineas Finkelstein in?”

“Dr. Finn, you mean.” The pretty brunette peered at them over her monitor. “Yes, he’s just finishing up.” The girl tapped at her keyboard. Her wet brown eyes took them in. “He’s expecting you.” She pointed to the electronic sliding glass door. “Just that way.”

Dr. Phineas Finkelstein appeared from a puff cloud of frothy steam emitted from the open refrigerator door. Wearing a bodysuit and headgear he looked like an astronaut emerging from a spaceship. “Greetings earthlings,” he said before removing his helmet. He bore a striking resemblance to Dr. Cox from Scrubs. His sharp eyes quickly scanned them with a serious crease in his forehead that belied his dramatic entrance. “How goes the journey?”

Elaine opened her mouth, but froze when Matty squeezed her hand.

“Terrific,” Matty said. “More than halfway, now, if you have the goods?”

Matty handed him the silver case. “Here are the samples, but it seems that you already have the product.”

Dr. Finn focused on Elaine. He handed her a zip drive. “ Here’s the formula. You take those to any lab; they can replicate it.” He pushed aside a framed picture of himself and Stephen Hawking, opened a safe and pulled out a small locked titanium briefcase. “The code to open it is Hawking’s birthday.”

Elaine smiled. Finn raised his caterpillar eyebrows. “Patented of course. Your company is handling that.”

“Now that we have the medicine, we need to make a stop on the way back,” Matty said, holding up his phone.

The terrified look on his face caught Elaine off guard. “What’s wrong?”

“Your grandmother? The one you told me about when we were camping?”

Dr. Finn shook his head. “It needs to be administered at the onset.”

Elaine threw a side-long glance at the professor. “You game, Dr. Finn? We’re headed to the southwest. Little ways past Albuquerque.”

Finn shrugged. “Why not. This project is over. School is practically in shut-down mode. I’m due a sabbatical.”

“Then we better hurry.” Elaine’s eyes ricocheted from Matty, who was worrying into his phone, to Finn, who stared at her like she was a three-headed alien ready for dissection. “Giddy-up partners!”

Sam and Hank sat outside a trendy lunch bistro. Hank sipped his coffee while Sam enjoyed a hard Kombucha. Music pumped in from the speakers above. “Heading for the Frisco Bay.” Sam hummed along, studying her phone. “California dreaming on such a winters day.”

Matty and Elaine walked up, sat down. A tall figure loomed beside them.

Sam looked up from her phone. “There’s fires popping up all over here. We need to skedat.”

Hank and Sam looked at each other and then at Matty and Elaine. “We decided to fly out,” Hank said. “It’s safer and now that the mission is complete, I need to get home to the wife and kids.”

Sam shook her head. “Don’t want to get trapped here or stuck in evacuee traffic.”

“Well at least underground or in the air, they’ll be safe from those fires,” Matty said, scrolling through his phone. “Sam’s right, we need to go too.”

“Air travel can be affected once the visibility is compromised. Also, smoke clogs engines, so it can cause mechanical failure.” Dr. Finn said. “But statistically, your chances are better in the air.”

“We better get going now, sis,” Hank gestured to the BART station. To Matty he said, “You don’t need the refrigeration unit anymore, right?”

“I talked to Dr. Finn about it. The medical vials are stable, so we won’t need to keep them as cool as the samples needed to be.

“What about your place in N’awlins?” Elaine hugged Toto. She’d started to get used to Sam’s witty charm.

“I left Max in charge. He’ll take care of it.” She smiled her million-dollar smile. “I’m headed to Hollywood.” She shrugged, emptied her Kombucha bottle and tossed it into the recycling bin. “Now that vaccines on the way, blue dot is obsolete. As popular as it got for a minute, the whole underground house party scene is shot. Over. Already mask burning parties. Maybe the underground scene will make a comeback as something else, red toe tattoo perhaps.

Finn waggled his caterpillar eyebrows. “If the virus mutates, but who knows what will happen.”

“So, the whole blue dot craze was just as arbitrary as wearing a mask?” Matty frowned.

“Even more so. It was actually make-believe,” Finn said. “Pure, utter nonsense.”

“At least masks slow the spread down.” Elaine gazed at Finn, his sharp eyes and curly brown hair made him seem younger. “A little. Right?”

Finn raised one furry eyebrow and said, “it was simply a way for society to function. In a state of suspended disbelief.”

“To believe what you want, what you need, so you can survive.” Hank stood and pushed his chair in.

“The consensus to live in fear is not something I signed up for,” Matty said. “I decided early on not to allow other people’s depressive tendencies, judgement and inability to cope with life swamp me.”

“Right, I don’t choose to hide under the covers either.” Finn nodded thoughtfully. “It doesn’t mean I don’t feel the anxiety or follow the rules, but I know the science behind masks is sketchy.”

“Right!” Sam said. “We’re all gonna fucking die but that’s no reason to live in fear.”

“But there needed to be a way to get the economy moving,” Hank said, “to avoid an even worse crisis.”

“Ten years ago, it was a crisis. Now it’s more of a collapse.” Elaine left some cash on th table.

“Well, on that note,” Sam said, pocketing her phone. “I need to catch a flight on outta here.”

Sam and Hank said their goodbyes to Matty and Elaine, and donned their masks before getting up from the table.

“So, you’re just going to go to Hollywood and peace out?” Hank asked when they looked at the transit map and realized they had to go to different airports.

“I’ll keep you posted, brother. You know those kids of yours are like my own to me.”

Masks in place, they walked down the stairs into the BART station.

The sunset burned lower on the horizon, greeting twilight and the riotous rivalry and flickering neon glow from the dive bar like an angry beacon, it warned them to leave soon.

When their laughter subsided Tabitha pulled Allison up, gathering their things.

“Here boy!” Tabitha held her hand to the dog, flipped the tag on his collar. “Germ,” she said. He panted like a desperate little camel, so she poured some water in a bowl. He lapped it up.

Winds blew the fiery sunset into hazier smoke infused night skies. The smoky air warned of the fires nearby, even more compulsion to get the hell out.

Allison’s dark silhouette grew hazy in the shadows. Dressed in her fluffy hippie clothes, she loitered near the car.

Tabitha combed through the biker’s pockets for his keys. She turned to Allison and said, “We need to leave now.”

They walked to the car, and Germ followed.

Still hungry for revenge, Tabitha realized she’d put an end to the compassionate vendetta by saving Allison. It didn’t make sense to drag her into the depths of hell. Germ would be better company. She reached into her bag for Eddie’s phone, dropped it into the passenger seat along with the car keys. “You’re on your own now, kid.”

“Oh, Tabby.” Allison sighed. “Eddie was just a passing flame. “This is different. Stay with me.”

“Toots if I was into clams and bagels, I surely would, but all I got is a case of brain swelling. I ain’t that crazy. You’ll have to be content with your freedom.”

Allison put her hand over her heart. “I’ll always be your girl.”

“If the grass ever looks greener …” Tabitha popped her leg over the engine and sat back on the seat of the bike. “I’ll give you a call.”

Tabitha looked back over her shoulder. “Here, Germ.”

Germ barked and bounded toward the big black bike. He leapt into the side car.

She blew Allison a kiss. “See ya!”

Tabitha revved the engine and eased off the brake. Looking in the side mirror, she gunned it, heading east toward the lonesome highway of Route 66.

Tabitha drove away from the California coastline with Germ in his ventilated side car seat. Allison’s waving silhouette, framed by the wild fires in the darkness, kept getting smaller and further away in the rear view mirror.