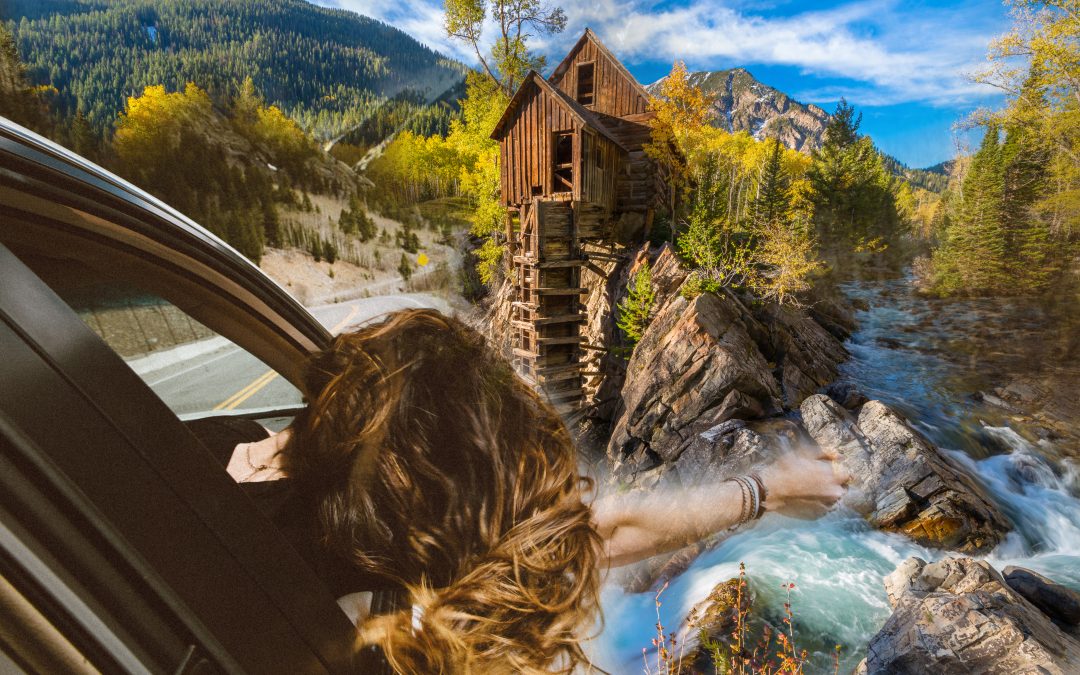 Tabitha pushed her foot to the pedal and left the desolate roads of Nebraska behind. Driving had a way of dropping her blood pressure, listening to the radio DJ voices changing accents from state to state.

After the nightmarish hell of detox, she pushed thoughts beyond the next turn or exit out of her mind, taking in only what was coming into view, rounding the corner of the mountain. Focus on driving.

Tabitha glanced in the rearview mirror trying not to look for what lay behind the darkened corners of her mind. She quickly flipped her eyes away from the misty surreal crackle that spawned Eddie’s ghost like the rain dancing on the windshield. A familiar shape glimpsed in the corner of her eye cut away the rough edges of hazy memories that unfurled and scattered driving West on 80.

Tabitha put her blinker on, turning down the winding narrow road through the canyons of the mountain. She checked the rearview mirror. And her peripheral vision shadows dissipated gathered from for a moment’s world and drift away she graded her teeth. Eddie you fucker—always had to have the last word. Jumping into my skin and dumping out all my drugs.

“Let’s see what we got here … Elaine, huh?” Allison scrolled and flipped through Eddie’s apps, finding the dating ones, opening them. “I’ll send it to you can see who she is. Kinda looks just like you in that one.” She held out the phone out at an angle.

Tabitha’s eyes flicked over the phone screen taking in her younger doppelganger. Miz Sherlock herself. If she could have smited the bitch from the driver’s seat she would have.

“Let me see your phone so I can airdrop everything.” Allison held her hand out. “That’ll be quicker.”

Tabitha reached into her purse, grabbed her phone and tossed it in Allison’s direction.

“Let me see it.” Tabitha took the phone, punched in the code and handed it back to Allison.

“See, you already have tinder installed.” Allison had already depressed the tinder app. “That makes it easier … Oh hey, he is a hottie. So, this is the guy from the news.” She scrolled to open the screen. “Who are you Matty Gale? Hmmm. Student at NYU, from New Mexico, retired Marine. Studying Sports Medicine. Good pick.”

“Oh yeah, well, Mr. Cool was a no show.” Tabitha heaved, why was she so fucking hot. It was dry as a bone in this crisp cool mountain air not even 70° in the sun. She turned to Allison. “I’ve never been stood up before!”

Allison was already browsing Matty’s social media. “Damn you don’t even have Facebook or Instagram on here. I’ll have to look on my phone.”

Tabitha scrambled in her purse for the pill bottle … Oh right. Gone. These fucking do-gooders.

Allison opened the app. “Wow he’s on a road trip in Colorado too! Look at these pictures of Garden of the Gods. Fucking amazing. We should go there.”

Tabitha grabbed a water bottle and drained it. Tossed the empty plastic container in the backseat and reached for another.

“That chick he’s with, Elaine, she’s a nut job. Check out this post on Zombie Antz! She has a whole theory that COVID-19 is related to …”

“Fuck them, let’s get situated for the night I’m tired of driving.”

“I’ll drive.” Allison put the phones away. “Seriously, in your condition, I don’t know why you’re still driving anyway …”

“No. Find someplace low-key to stay. I need to rest.”

She accelerated down the twisty windy highway, following the crashing turns of the Colorado river that failed to drown out Eddie’s last whispers living heavy in her heart, even with the windows open. His presence visceral, looming silent in his absence. He was truly gone now.

Echoes of his final words drifted and flowed followed deep into the shadows cast by the afternoon sun dissipating behind the Rockies. Early twilight swallowed up the silver bullet.

Idaho Springs emerged as if chiseled into the Rocky’s by a surreal master craftsman from Olympus, set amongst caverns carved into the Colorado mountains following the slush of the river. No big box stores or hotel chains. Just little mom and pops restaurants and shops here or there. Small markets with artesian crafts. It was like going back in time, but with all the modern conveniences.

The Big Little B&B in Idaho Springs was an old Victorian, with a wraparound porch overlooking the Colorado River. A neon sign hung above the front doors proclaimed the establishment open when they pulled into the parking lot.

Inside, the styles were a blend of wooden wild west to country kitchen linoleum contemporary. The proprietor leaned over trying to sneak peek down Allison’s tank top while handing them a set of plastic keys with a wink.

Tabitha rolled her eyes. Allison waved it off. They followed him up the creaky, narrow staircase, walking up uneven steps.

The room was worth the inconvenient leering old dude situation. Open windows with vintage lace curtains blowing in the breeze offered views of sunlight dappled mountains hitting at just the right time of early afternoon, no matter what time of year. Amber hued from the antique furnishings, sponge pained walls and bedrooms off of a comfortable period sitting room with French doors leading to a solid wooden deck. It couldn’t have been more comfortable. Tabitha planned on a good long soak in the deep claw footed tub.

Hours later, Tabitha woke tangled in a snarl of damp sheets, hustle and bustle out the window, slipped out of bed, splashed water on her face.

A feeling of dread clamped in her stomach and wouldn’t let go, squeezed until her eyes snapped open.

Allison was standing on the deck in front of the open French doors, her silhouette lit up from a shaft of moonlight shining on her lithe frame. She sighed and ran a hand through her blonde mane.

A shiver ran through Tabitha and she didn’t know why. Was a little piece of Eddie still lodged in her from their tryst?

She pulled the covers back up, but tossed and turned.

The hard truth pandemic life illuminates is that death looms for all of us. Some sooner than later.

Reality has reared its ugly head.

Life is altered, and not for the better.

Even without the pills, Tabitha was numb. No pain. No joy. Just nothing. What would happen if she’d stayed in the city? Therapy and sympathy. More drugs, prescriptions or otherwise.

A sense of loss plagued her. She couldn’t shake the ever-present sense she’d forgotten something important. It was a constant now, this emptiness. Her mind raced but then she realized if she rested in the grey mists of nothingness, she might get stuck. Forever.

She reached under the pillow and curled her hand around the gorgeous amber tinted plastic bottle that a previous occupant had so graciously left behind. Thank you, Jaqueline Burroughs, whoever you are. A half full bottle of Vicodin.

Tabitha slid her fingernail under the white cap and softly popped the top, palmed a capsule and slid it to her mouth. Smiling, she curled her tongue around the little pill, swallowed and drifted into slumber.

No, it’s better this way.