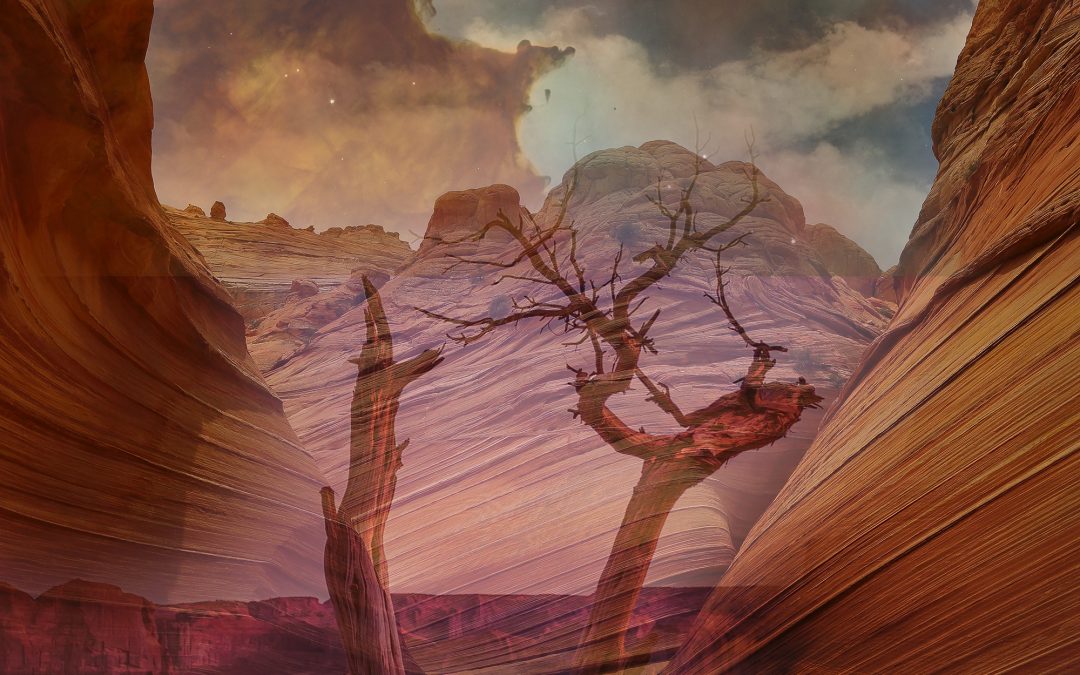 Back on the road with Sam, Hank and Matty, Elaine decided Utah looked like Mars as they wove their way through the canyons and valleys. From the safety behind the windows of their starship, the early morning sunrise bathed the surrounding sand dunes and porous rocks in fiery orange and burnt rust hues.

“You fly, I’ll buy.” She offered to Hank, who was taking a shift driving. Matty and Sam were completely sacked out in the back seat. The heat of the blazing yellow summer day was already making her dream of California’s cool breezes and the Pacific Ocean.

Hank nodded, grunted and turned down the music so they could talk. They debated where to stay overnight between Utah and Berkley, since they’d be heading back east as soon as they dropped the last sample.

Elaine arranged a place to stay, since Matty was asleep. Camping was not her jam. “Overlooking the water. Mountain view means far from the tourist shit, but easy to get in and out. Chalet they call it. Sleeps five, should be big enough.” Tahoe was on the border between Nevada and California, so they reset the GPS.

By the time they arrived, Elaine’s stomach growled.

Matty woke as soon as they stopped. “Where are we?”

“Smack on the border of Nevada and California,” Hank said parking in front of a dark wood slatted chalet overlooking the sparkling blue waters of Lake Tahoe peeking through the mountains.

Upon entry, Sam grabbed her suitcase, headed to the master suite, completely ignoring the view of the mountains and closed the double doors behind her with a sharp tap from the bottom of her shoe. The place was rustic, but furnished, with oak wood flooring, ornamental throw rugs, seating by the fireplace, and a spectacular view from the balcony.

Elaine, Matty and Hank rode into town for food. Sam had asked them to, “bring her something.” They found a place on a quiet side street only a few minutes away from their mountainside retreat. It had an outdoor terrace, a chic wood-paneled bar, where they stopped for a couple of microbrews while they waited for a table.

Elaine’s voice rang a little out of tune about their mission, even to her own ears, her false bravado sounded pretentious. Focusing on the distraction of the COVID medicine was the only way she could keep he mind off the spiral of obsession about Matty. It would go there if she let it. So, she didn’t. But she felt the superficial dance around her heated desire wearing her down with each breath.

Hank made a joke to soften the mood and Elaine chimed in to the chorus of their laughter. Outside the cavernous microbrewery, they mulled over menus full of classic bar food. The microbrews went down easily though.

After another round arrived and their orders were placed, Hank tried to solicit friendly conversation, asking about her parents. She shrugged her shoulders and made no reply. With a twist in her gut, the scenic views and the dreamlike sunset visible from the lounge terrace went unappreciated. Elaine’s nerves jangled.

Back at the chalet for the night, Hank had offered to take the living room pull-out couch bed and give her and Matty the second bedroom. He didn’t realize she and Matty were not together. Well not since the night that ended with a poop bag … some things were just better forgotten.

Matty explained. Hank laughed; eyes sparked with understanding. The tension and long silences finally made sense to him. He shook his head and nodded toward the bedroom. “She likes you though, man.”

Matty raised his eyebrows and scowled. “Could’ve fooled me.”

Hank gave him a hard look. “And you like her.”

Tossing and turning in the bedroom with Matty just outside the door on one of the pullout couches in the living room, shattered jigsaw pieces of memory broke into Elaine’s attempts at sleep, dwelling instead the scarcely bearable reservoir of memories of the life she’d left behind caught up to her that night.

She was trudging through a fiery inferno of grey pavement with cracks running through it. Zig zags of yellow lines swept by, like the endless roads of hell. A grey dog disguised as a doctor rode a motorcycle across the sandy desert behind them. He was catching up and he had a scary gleam in his red rimmed eyes. The heat rolled in waves off the sandy desert dunes. The red planet raged with a Zombie apocalypse.

Her mother had followed her from the grave, her skin hanging off in patches. She was trying to tell her something but Elaine kept running from her, covering her ears like she had done as a child. Brain swelling, robberies and disasters of violence hit the news with new epidemics of violence. The grey dog was almost upon them and she knew she must not let him catch them or there’d be hell to pay. He lived in a tee-pee near Albuquerque.

Elaine woke up panting, out of breath with a headache like she’d never had before. Her sheets drenched; she threw them off. Her nightgown was soaked through, like she’d wet the bed. Had she? Elaine shook her head, sniffing for the non-existent scent of urine. Nope. She grabbed her backpack from a chair in the corner and tried to sneak out to the bathroom without waking anyone. Damn Sam for taking the master suite.

Matty’s eyes snapped open from a deep dreamless slumber to see a shadow flit across the room. His military training immediately kicked in. Eyes wide, he slithered from the pullout couch using the sound of Hank’s heavy snores to disguise his stealthy movement across the creaky hardwood living room floor.

Noise like scraping from the kitchen or outside snared his attention.

Once his eyes adjusted, the full moon lit up the room like a floodlight, so he ducked around the kitchen corner in time to catch a nearly naked Elaine slipping into the bathroom off the kitchen hallway. He sat down heavily in a rickety wooden chair, not bothering to turn on the light, letting the adrenaline that flooded his system slowly ebb.

No use in trying to go back to sleep. He quietly flicked the hot water heater on, listening to it heat and burble. Elaine’s shower slowly churning in the background. He tried not to think of her nude body lathered in soap. Arggh.

This trip had been difficult from the beginning, but had gotten progressively harder with every second spent in close proximity to the one woman who seemed to hate him no matter how hard he tried to please her.

Matty ran his hand through his tousled dark hair, stood to grab a mug and sort through the teas. He normally scored pretty well with the ladies. Hell. He was usually the one to break things off. Until the pandemic happened. Then he wanted someone around and there seemed to be not a single woman in sight. Nada, Zilch. Until Elaine stumbled into his life …

“What are you doing up?”

“Sure.” Elaine dropped her wet things in the chair Matty had been sitting in, sidled up to the counter and leaned across him to pluck a mug from the cupboard. “Where’s the tea …”

Matty couldn’t take it for another second. He leaned into her and kissed her like they both might die the next day, hour, minute …

Her bottled rage, anxiety and heat came bursting out like a tidal wave. Her hands snaked up, over his ropy shoulders, into his hair.

He lifted her onto the counter, her legs encircled him. He pulled away for a heartbeat to look into the depths of her eyes. “Are you sure?”

Elaine smiled her assent, pressing into him. “We always were good in kitchens.”

Tabitha and Allison pulled up to the sandy dunes of the Pacific Ocean. Tabitha parked in the parking lot of a seaside dive bar near the water’s edge just outside of Santa Cruz. California rocky coastline had changed to salty seas, sand and surf along the side of Route 1.

Allison flung open the door, trudged through the dunes and went running toward the waves dropping clothes as she did. A fluffy skirt and sheer top hit the sand. Tabitha trailed behind, exhausted, needing another pill but trying to pace herself so she’d sleep through the night. Sunset on the California coast.

Alley cat dove into the surf like a mermaid, whooping and hollering. Tabitha gathered the strewn clothing, feeling like a parent. Allison had emerged from the waves and began walking toward her when they heard it.

A man’s loud deep voice growled, “Get over here you stupid mutt.”

Followed by a gut-wrenching smack and a yelp.

Tabitha’s nausea fell away, replaced with a deeper sense of dread.

Allison, too far ahead, yelled and ran. “Hey, leave that dog alone you asshole!”

The biker dude in leathers, chaps and a sweat stained wife beater T-shirt smirked when he looked up. “Well, lookee what we got here.”

Tabitha’s head swiveled. The noisy dive bar that lit up the glowing red skies was a football field away at the other end of the parking lot. Its blaring music competing with hooting and hollering meant no one would hear, or give a shit, what went down where they were standing.

The biker dude let go of the leash on the small dog, stood, and began staggering toward Allison. His footsteps covered lots of ground with each stride.

Tabitha scrabbled in her purse for something.

Her fingers encountered a cylindrical object. She ran toward Allison. He had hold of her now and was wrestling her down into the sand dunes just outside the parking lot.

The little gray dog was barking furiously to no avail.

Tabitha plunged the needle into the biker dude’s meaty shoulder.

“What the fuck?” he gurgled just before he passed out on top of Allison.

She writhed and cried under him. Tabitha pushed and Allison heaved from underneath the mountain of gristle and beer guzzling fat. He rolled onto the sand sandy edge of the parking lot.

The dog pranced over and sniffed them. Ran around in a circle, paused, looked at Tabitha before he raised up his hind leg and peed on the biker’s head.

The inert man’s do-rag fell off his noggin under the steady flow of dog piss.

Allison’s tears turned to laughter. She and Tabitha sat down in the sand, unable to stand, giggling uncontrollably.