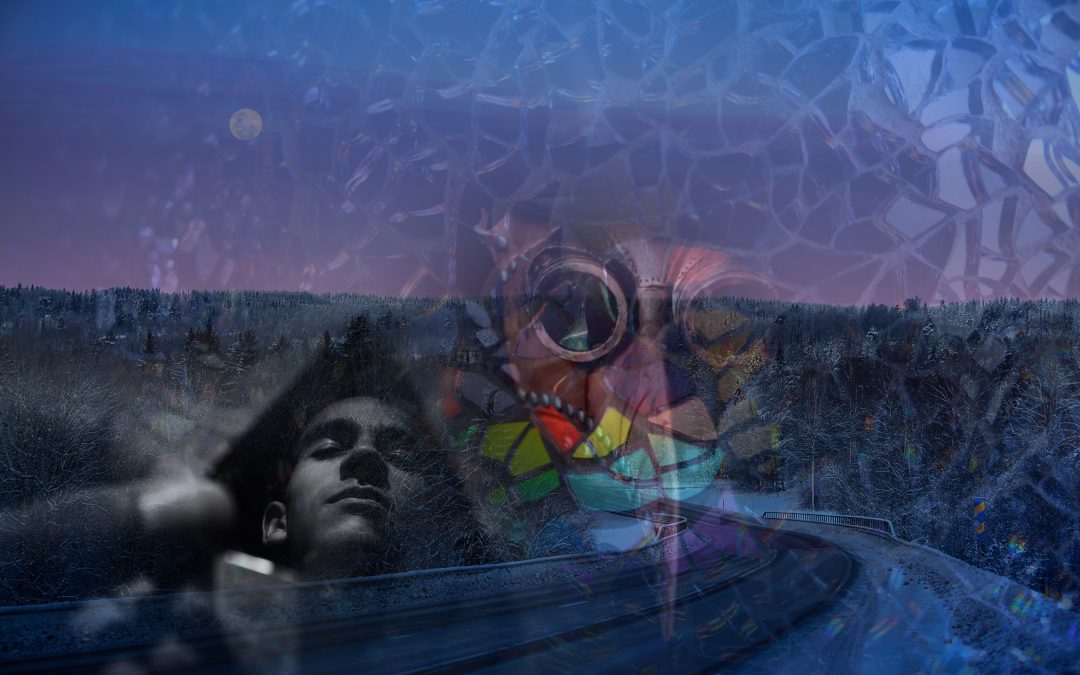 Bed springs groaned under his weight. “You awake?” Matty asked.

Elaine opened one eye as he sat down beside her. “Kind of.” She wiped the saliva that had rolled out of her mouth onto his vetiver scented pillow case. “Why?”

He leaned over and planted his hands, so he could see her face. “Help yourself to the coffee in the kitchen but don’t leave until you’re ready. I gotta go in to work. They called an early meeting. Some new special project. See you later?”

She sat up a bit and leaned back on her elbows as he stood, smiled up at him with her mouth closed so he wouldn’t smell her morning breath.

The flat sound of his shoes scraped against the hardwood floor. He opened the bedroom door, turned back and looked at her before slipping out. “I hope we can do this again.”

She nodded, sliding back, glancing out the window at Manhattan’s upper east, before she nestled back under the covers. Who has a work meeting on a Saturday morning? Especially during a Pandemic?? What does he even do?

The door closed behind him. Footsteps receded.

She thought about going back to sleep but thirst and a steadfast addiction to caffeine lured her toward the kitchen. A little unsteady on her feet, the knowing throb between her legs reminded her of the pleasant evening they’d spent after leaving the bodega. It wasn’t often she met someone she was so intensely and instantly attracted to. Couldn’t stop herself at all.

Pandemic insanity. Or maybe the wine. That’s what it must be.

The night swirled through her consciousness along with the morning light. Clothes scattered all over the floor. Hmmm, definitely a bachelor.

Elaine ducked into the kitchen, past the counter in search of coffee. Her breath caught. Scene of the crime. Beans grinding. Gurgle of the coffee maker’s last sigh.

The evening filtered back through her morning fog. Non-stop talking, the slow seduction of cooking together. Stolen kisses. Within the close confines of the kitchen, his hands roved up her thigh. He’d kissed her neck. She’d closed her eyes, given herself up to it.

He’d held her up against the counter, brought his lips and tongue to her mouth. The mask-less sensation reached deep. His tongue explored the smooth texture of her lips. He unbuttoned her shirt, moved lower, running his tongue down her abdomen. He’d slowed, moved lower with his mouth, lips, tongue, brought her to climax.

They hadn’t stopped there. She unbuckled his belt and slid his pants down, cupped his rigid organ. Kissing, enmeshed, he made love to her against the counter, until he scooped her up and carried her to the bedroom.

Elaine took a quick shower in the master bath while she waited for the coffee to brew. A quick dab of lip gloss and mascara, and she was ready for her java fix.

A wave of nausea hit. Oh, no! The foreboding gurgle in her belly. Fluids churned; bursting seemed imminent.

She tugged off her skinny jeans just in time to plant her ass on the hard, cold rim of his toilet before the stink of her ginormous poop reminded her never again to mix tequila shots with red wine before dinner.

As the stench squirted from between her ass cheeks, she decided to check his mail before she left to get his last name. She tried not to delve into self-recrimination over a one-night stand and newly acquired drinking habits, mistakes made or question the nature of instant karma. What’s really going on here? Is this just one more in a series of self-sabotage and bad choices?

“Never again,” she said aloud to the empty bathroom. Reaching behind her to flush the toilet, she pressed down on the lever and heard the empty clink of the metal spring detaching and falling inside the tank.

“Fuck.” She stood, tugging up her underwear before she turned around to feverishly press the broken handle again and again. As if repetition could manifest a different result.

She wordlessly picked up the porcelain top of the tank and glanced inside considering the merit of tinkering with the twisted chain inside the quickly filling bowl. The rubber flapper had disconnected. She could see the broken lever, and as a pin floated its way up, the valve began vibrating like a truck.

Water pressure was building. The flap would not close. Those were solvable, but after seeing the rubber flapper float to the top, she knew there was no arguing with this mechanical failure. Not in her present condition anyway.

Elaine placed the lid back on the broken bowl, ignoring the clink and tinkle of the broken chain swirling in the rising water. Clink, tinkle, clink. It banged against the porcelain. She reached below the bowl and shut off the water before it overflowed. Best not to touch it again unless she wanted to add mopping to her growing list of morning chores.

Heading back to the kitchen, she improvised hair drying at the window AC unit. She poured coffee into a mug.

Spilling a few drops of the coffee on the counter, she tore a paper towel from the roll beside the sink. Searching for the trash, she opened the cabinet beneath the sink. She opened the garbage bin and noticed a stack of mail, junk mail and stuff that looked like it could be important. Curious, she grabbed one off the top and looked at it. Sundance Catalog. Ipsy Glam Bag…what the fuck? All chick shit! Elaine felt a pulse in her left temple. Like a migraine starting. But worse.

“Mother Fu…” she started to shove it back in. Asshole. She grabbed an empty plastic bag from under the sink and rummaged around the kitchen till she found what she was looking for. I’ve got a better idea.

Elaine slid the sticky turds she hadn’t been able to flush into a plastic bag using a spatula and a sauce pan. She briefly rinsed the cookware and utensil before replacing them back where she’d found them in the kitchen.

Ready to go, she scribbled a note on the back side of the envelope addressed to his wife. Keeping it simple, she wrote It’s been real. XO. She left it on the kitchen table right beside the bag of poop.

Her phone beeped. A text from Gertie, “Did you get the baby wipes?”

Elaine rolled her eyes, and retrieved the wipes she’d left on the bathroom sink.

Making sure she had everything, Elaine sat down to slip into the strappy sandals she’d worn out the day before on her ill-fated shopping trip. She typed out, “yes, bringing with. See you this afternoon!”

Juggling her phone, purse and the leftover bottle of wine, Elaine opened the door and stepped out. She dropped her phone back into her purse to yank the door closed. The girth of the heavy door swinging shut behind her underscored the tangible click as the lock slicked into place.

A slow smile spread across her face. “That’ll teach the fucker!”

Tabitha moved in a daze. The cops had come and gone. The medical examiner unceremoniously schlepping the inanimate cadaver of Eddie into a body bag on a stretcher and wheeling him out.

She pulled out the roll of cellophane she’d found in the bedroom leaning behind the door, slid it under the soiled bedsheets, pushed and rolled the whole mess onto the plastic and wrapped it as well as she could. You’d think the city would have sent someone out to clean up the mess but no, not a chance. Blame it on COVID was the mantra for everything.

His phone buzzed from where he’d left it on the bedside table. His last text to her read simply, ‘goodbye.’

Thank god she knew his passcode. He hadn’t changed it. She ignored the buzzing phone. Her hands were full. She rolled the heavy-duty plastic up and put a zip tie around the knot she’d tied tight, just to be safe. Into a garbage bag went the heavy mess, still warm.

Tabitha dropped the garbage bag of soiled sheets and raced into the kitchen just in time. She projectile vomited into the polished chrome basin and ran the water and garbage disposal. The cops had already come and gone. “A clear case of suicide,” they’d said.

The sink looked full of pieces of Eddie. Tabatha picked up a sponge and scooped the pieces toward the drain hole. Glad now they’d gone with the steel gray instead of the white porcelain when they re-renovated the kitchen a few years back. It will be much easier to clean the blood…

She blinked. It wasn’t him. She must’ve puked again. Gross!

She flipped on the garbage disposal, watched the chunks of vomit dissolve. It reminded her of Eddie’s brain splatter…grey matter swallowed up as she fed the hungry disposal strips of meat heaved from her guts, like gore from a snake turned inside out.

Tabitha ran the water, watching the vomit guts slither into the noisy mouth at the bottom of the sink. She heard Eddie’s phone vibrate against the kitchen table where she’d left it.

A slow smile lit across her face. Tabitha knew exactly what she was going to do about Allison once the social media frenzy died down. Ignoring the phone, she let the desperation build a little more while she cleaned. Around 11 pm she sent her first cryptic text to her husband’s lover from his phone.

Tabitha envisioned Allison banging her head against the headboard of an empty bed, wondering at the lack of response. Crypic messages followed by silence would eat her alive.

It had been easy to pick up on the syntax of their messages once she knew where to look. She banged out another. “Miss you babe, be there soon.”

Right about now, Allison would be chewing her lip as she stabbed and swiped her phone. M-T. M-T. Tossing her phone down on a red silk pillow, at the frustration of being stood up, probably on her fifth or sixth cosmopolitan on a Saturday night. Stuck. Quarantined in her trendy little studio, with one of those stupid lofts where you had to climb up a ladder to get to the bed, somewhere in East Village.

It made her smile. “All righty Aphrodite.” Tabatha finished cleaning the apartment. “Good to go.” Just enough time to get a few hours’ sleep before I need to pack.

An hour later, Tabitha picked up Eddie’s phone, without reading a single one of the jumbled 20+ incoming texts or even bothering to check how many voicemails were from the skeevy little bitch, and forwarded Allison the link for place in Vermont. She had booked the star-crossed lovers at an Inn a few hours away in Vermont. A comfy, cozy little B&B. It had taken her a while to find somewhere that had a vacancy in spite of the pandemic, with fall foliage season peaking early, but she’d managed to find one.

Then she turned off Eddie’s phone and plugged it in to charge.

It was indeed the end of an era. The beginning of a new one for her. She’d leave a trail of gas stops and restaurants on his credit cards all the way into the Queen City, then she’d ditch Allison and her car close to Lake Champlain. She hadn’t decided a motive for her escape to Canada. The how part she would leave to the imaginations of the cops.