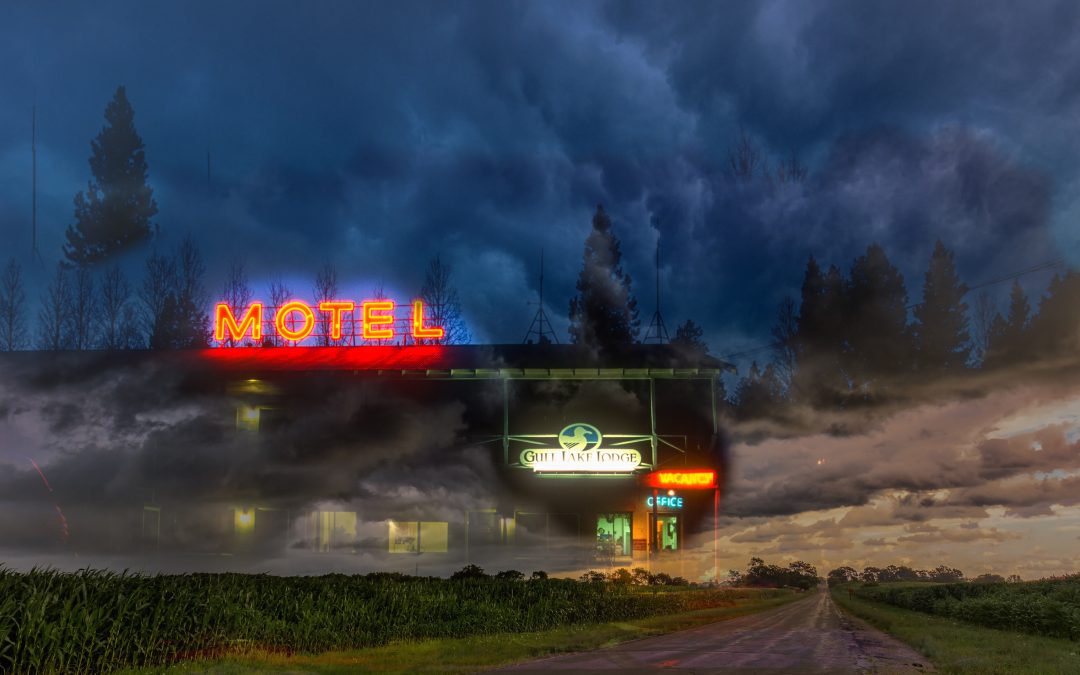 “Ha, ha dead body in there, sure thing!” Tabitha jokes, handing silent Bob another couple of folded Jacksons for bringing her husband’s oversized suitcase down to the car and loading it into the trunk.

Soon to be dead anyway. She considers a Benjamin, but doesn’t want to be remembered as anything other than just another tourist.

Allison is still unconscious until the trunk slams shut.

It’s dark. She doesn’t know where she is or what’s happening. Or if her eyes are open or shut. They feel open, but nothing. An engine turns over.

The sensation of movement starts, then rolling forward, or sideways. She can’t tell, but one thing is clear. She’s in a car.

The squeak of a brake.

Gasoline smell. Voices and the clunk of the metal pump being thrust into a hold close to her head. Fuck.

She tries to call out, but her throat has glass in it.

That’s when the nausea hits.

The fluid trickle of gas gurgles and stops, pump replaced.

Allison can’t feel her body. She can still smell something vaguely like gasoline, but maybe a little like mothballs or possibly an old sweaty sock.

What is this? There’s a rhythmic sound of tires moving on a road and the occasional bump. Moving on the highway.

Where am I and what is happening to me?

Panic would be easy, but she wouldn’t be in production if panic was her go-to.

It must be a dream. A scary real dream.

A muffled sound of music.

She fades back to unconsciousness

Light. Too much. Her eyes are beating, sockets pulsing.

Allison’s head lolls back for a moment and she sees Tabby upside down.

Oh good. It is a dream. Eddie’s wife. She recognizes her because she’s looked through Eddie’s phone a million times before. Holiday gatherings with nameless faceless strangers and a friend in common’s patio in the Hamptons. But she’s always smiling in the photos.

Allison tries to talk again, but the glass has turned to a cactus enema.

Something cold rubs against her back side. She can’t figure out what it might be. Until the prick pokes her. Not a dick, it feels like a snakebite.

Her heart races, then slows.

Allison fights against the dark waves that suck her under like warm octopus tentacles pulling her into the depths of unconsciousness, again.

Alison’s head jangles against the thing around her in the car. She struggles to move, despite the nausea, but gives up. Still can’t feel my body.

Am I dead? Is this what it feels like?

No. It can’t be. She remembers Tabitha. Tabby. Her face inverted, so different than she imagined. She knows this isn’t how she’d thought it would be, meeting her that is. Trying to hold onto the thought too long brings tears to her eyes, a river of snot.

It gags her. She wants to throw up but that would be a mistake.

She swallows the hot tar back down her throat.

At least I’m not dead.

Tabitha finally stops at a seedy motel off I- 80 somewhere in Nebraska. She’s been driving too long. She’s almost out of pills. The drenching rain that held off all day descends.

Neon yellow, orangey Vacancy sign strobes against dusk, the sky behind it fading from a dark afternoon to an early night. Precipitation and wind pelts raindrops sideways, in a way particular to the flat Midwest.

Tired of fighting with the heavy bag, Tabitha looks in the rearview mirror. The red lines across her eyeballs map out the twenty or so hours of driving it takes to get from Vermont to Indiana. She’s got to open it.

Tabitha slips on her mask and gets the key from the lady at the front desk, then drives to the end of the long cinderblock building. Long barren stretches of cornfields unbury deep anxiety from her escaped childhood in a struggling farm family from the flat empty midsection of the country.

Tabitha parks with the nose of the Oldsmobile pointed at the rusty brown expanse of some farmers field fading into the hazy purple descent of twilight. The room key sits in the seat beside her, attached to a yellow plastic ring with a slip of paper that has a room number on it.

She shuts off the engine and puts the key to 108 in her pocket, slings her small carryover duffel bag across her shoulders and puts her hand on the door handle.

She hesitates for a moment, getting out of the car with the door open wondering if she should wait for the rain to let up a little.

Flashes of her youth in a farmhouse with mother cooking on the stove and Poppa behind a black and white TV, newspaper in his face, smoking a pipe while the rain falls outside for days, remind her that it won’t quit anytime soon.

The wind is blowing hard enough to make the sharp sideways drizzle run up her nose and into her eyes while she staggers around the trunk with her keys out.

Freezing. Tabitha buttons her coat, leans toward the trunk.

Years or months or hours or maybe only minutes later, Allison hears the muffled sound of footsteps, wind.

A woman’s muffled grunt, foreshadows the sensation of light.

Allison tries to climb out gracefully but Tabitha can see she’s having quite a bit of trouble. “Come on.” Tabitha tosses a cotton disposable mask down at her. “Put this on.” She has to help her out.

Allison glares at Tabitha, her watery blue eyes spew hatred and something else, fear.

Tabitha wrenches her arm, she’s taller. “Don’t do anything stupid.”

Allison screws her mouth, spits in Tabitha’s direction. Tabitha slaps her with an open hand and almost knocks her back in the trunk.

“I thought I told you not to do anything stupid.”

“Fuck you,” Allison seethes, her scratchy voice garbled by her hand cupped to her mouth. Her matted blonde hair and crusty, tearing eyes nothing like the pictures Tabitha posted of her with Eddie in that hotel room. “You expect me to walk in there with you?” Allison darts quick looks about. “Aren’t you afraid I’m going to run?”

“Nowhere to run to out here. Besides…” They get from the car to the overhang, with Tabitha mostly pulling, propping. “If anybody sees us, they’ll just assume your drunk.”

Tabitha walks her past an ice machine with cobwebs. A small laminated sign says out of order. “It is a pandemic after all. Lots of people drinking, drugging even more than they normally would these days.”

Tabitha leans Allison against the door jamb, hustles the key out of her pocket and lets them into the room. She hits the light switch to the right, turns to Allison. “After you, dear.”

Allison fell into the room. She doesn’t mean to, but the door knob catches her jacket pocket. One of the two queen beds breaks her fall. Synthetic plastic and cigarette smoke assaults her nostrils once the door closes. “Smells like Death of a Salesman in here.”

Tabitha unbuttons her coat, drops her duffel bag on the only chair. “I don’t smell anything.” Heat chortles from slats on a beige metal box affixed to the wall with an irregular rattle, like a cockroach on meth beating itself up, flying zig zag inside the vent trying in vain to escape. Maybe a couple of them fighting for the last crumb of crystal.

“Make yourself comfortable, kid.” Tabitha marches to the vent, before the cockroaches turn into a family of inbred meth addicts playing racquetball, and turns the dial off. “We might be here a while.”