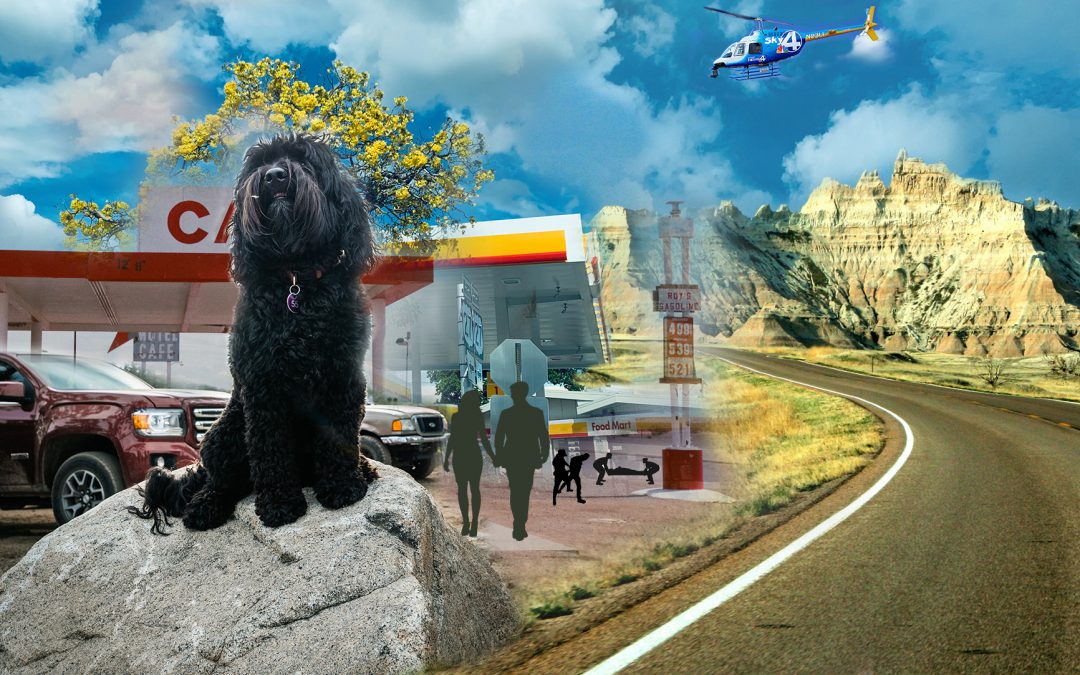 After a full day of driving, Matty stopped to top off the tank at a Texas sized truck stop between Wichita Falls and Amarillo. Tired and very hungry, Elaine offered to pump the gas in exchange for staying long enough to get something to eat.

She needed a minute alone. Sitting next to Matty wore her down. The gear shift and console between them did little to distract from his nearness. A slow burn crept through her from the heat coming off his body.

Elaine watched Matty follow Sam and Hank into the Mellow Deli. Lots of cars. Some newer model mini-SUVs, a rusty old VW bus with a pair of even older hippies in tie dyed masks up front, a green Subaru station wagon that matched the cute, preppy masked family inside. In the spot ahead of her was a sun burnished Toyota Celica loaded down with boxes and a shaggy black terrier poking his snout out the half-rolled-down window.

The drawl of a man speaking intruded on Elaine’s voyeuristic daydreams from the other side of the pump, “…some gas maybe, but I’d be much obliged for anything you could spare.”

The no-nonsense soccer mom, that the hidden man was talking to, pursed her lips and shook her head. “Sorry,” she said, swinging the metal dispenser back into the slot of the gas pump. “Can’t help you. I’m out of work myself.”

He followed her back to her driver side door. “Thanks anyway, ma’am.” He doffed his baseball cap revealing a receding hairline. Noticing another occupant in the shadows of the passenger seat, he replaced his cap. “Y’all have a nice day.”

Elaine hid behind her open car door. Glad for the dark tinted windows, she followed his newish Nike sneakers. He walked in a small circle before moving on to the next car, further away, on the other side of the gas pumps. “Excuse me, sir, could you help me out with some gas?”

Elaine exhaled a short sigh of relief out the side of her mouth. Good, he didn’t see me. She stood up straight, shaking off the unease overhearing the brief interaction had caused, before returning her attention to the gas pump. She watched the numbers spin.

More gallons, and more money spent. Cheaper gas than New York, but this vehicle also guzzled a lot more gas than her little four cylinder at Gertie’s. She snuck a peek at the spare-changer hustling his way up and down the pumps. He looked like a normal dude; thirties-ish, slight build, Braves cap and spectacles – not the cheap kind.

She shook her head wondering how many people just barely hanging on were going to fall into the widening chasm between the haves and the have-nots in this country during the pandemic. If the ratio of open gas pumps to traffic was any gauge, the economic undertow already seemed bleak.

The gas stopped flowing with a pop. Elaine housed the metal handle of the dispenser in the pump receptacle, pressed no for the receipt and shut the car door. She clicked lock on the keys and headed toward the Mellow Deli, stepping quickly across the parking lot before the panhandler could make his way back to her.

Catching the elastic behind her ear, Elaine pushed open the door with her elbow and smooshed her mask in place. Inside the florescent incandescence ricocheted off rows of junk food and magazines. The smell of pizza and rotisserie hotdogs marinating in their greasy warmers assaulted her.

Elaine’s stomach grumbled a warning. She was starving but there were limits to what she would subject her body to. She ordered a soft pretzel, heated, and wandered to the cooler looking for a drink. Keeping alive on truck stop food wasn’t easy, but it made a good excuse to relax her food restrictions.

“And girly magazines,” Elaine noted. She picked up and inspected a one-shot bottle of Wild Turkey, decided that wouldn’t be enough and grabbed a handful.

Elaine placed her collection of mini bottles on the counter with two vitamin waters and chips for later, as she stepped up to pay for the pretzel.

They sat beside Hank and Matty, who’d gone all out on plates of pizza and hotdogs at the plastic and vinyl booth by the soda machines. Elaine savored every bite of her delectable hot pretzel. It came with home fries. Worth every carb.

“Sounds like a black and white sit-com from the fifties.” Sam said.

Hank laughed. “Only to city folks, sister. Round these parts, not much has changed.”

Elaine passed Matty the keys and headed to the restroom in the corner. It was the only place she was actually grateful to wear a mask.

On her way, she snapped a picture of the bright, loud and messy slice of Americana. It was real to her. Gertie would love this place. They shared a fondness for campy joints.

She pushed open the bathroom door, glad it was empty and went into the middle stall.

Reaching for toilet paper, she tried to get more than one paper-thin piece torn off the roll…

A staccato trill of racquetball slaps.

What the fuck is that? Elaine yanked toilet paper hard, not caring that she was holding a shredded scrap, pulled up her pants. She turned to flush automatically, then decided not to.

Her gut curdled. She didn’t want to make noise.

Elaine stumbled out of the stall just as Sam came crashing through the door. Her hands over her head, crouched down low, she duck-waddled through the door like a soldier or a cop in a movie.

Elaine’s first impulse was to laugh. She clamped her hand over her masked mouth, not thinking this a good moment for hysteria, she breathed in and out her nose.

Sam pushed the hydraulic door closed behind her, and squatted against it. Her face vaguely resembled The Scream, make-up trailing down her cheeks, her mouth open, breathing hard.

“Gunshots,” Sam hissed. She pushed herself up, evidently deciding that she’d barricaded the door with her maybe one hundred pounds long enough, or that it was a useless deterrent. She made a beeline toward Elaine, grabbed her wrist and yanked her toward the stalls. “We need to hide.”

They barricaded themselves in the last stall at the end of the row farthest from the door together. Elaine already had her phone out texting Matty, “in the bathroom.”

She saw the dots flow of Matty’s response, “stay there hide.”

More dots and then they stopped.

“Shit!” She saw Sam was doing the same, and put her phone away.

Elaine held her breath. She could hear Sam’s heartbeat, or was that her own?

Pandemonium erupted; sirens, yelling, footsteps. It sounded like and army battalion had landed outside the bathroom door.

Elaine and Sam held hands, clasping each other as if the vise grip would give them superpowers. At least the power of invisibility.

The door cracked open. “It’s okay to come out now,” Matty’s voice unleashed a tremor of blessed relief. “The cops are here and we got him.”

Elaine pushed herself up, following Sam out of the stall.

Matty held the door open. Sam rushed out under his arm. Elaine fell into Matty’s embrace. She buried her head against his shoulder “Oh my God, that was fucking scary!”

“I know.” He wrapped his arms around her, rubbing her back. “It’s okay. Hank took him down like a ragdoll. You should’ve seen it!”

Matty led her through the commotion. Cops and paramedics swarmed.

Blue and red lights swiveled. She felt dizzy, like she’d stepped into an alternate reality in a movie or a dream.

“Did he shoot anybody?”

Elaine glanced back over her shoulder. A slim woman with a vacant stare was being rushed out the door on a stretcher.

“And a trucker who tried to intervene.” Matty ushered her around a big stocky guy with Harley Davidson do-rag sitting on the counter talking to the police, brushing away the paramedic trying to bandage his wound. “No kills though.”

They caught up to Sam and followed her toward the front door. “Hank’s out there…” She nodded out the window… “talking to the cops.”

Outside was even more surreal. Cops everywhere, uniformed police, paramedics and reporters. She counted three vans with rooftop satellite dishes.

Hank, surrounded by police and reporters, was giving an animated play-by-play from the looks of things.

Sam quickly attracted an entourage, for whom she smiled. Talking for the cameras, she appeared to be in her element, reacting to the flashes of lights, a microphone in her face.

“Lots of paparazzi for a Podunk town in Texas,” Elaine said.

Matty pointed to a helicopter that was landing in a nearby parking lot. “News travels fast.”

“Holy shit.” Elaine craned her neck to watch the whirly bird land. More reporters and cameras spilled out, headed in their direction.

“Where’s the car?” Elaine felt the adrenaline leave her system. She wanted to curl up and take a nap. For a month.

Matty pulled her along. “Guess we’re going to be a little delayed.”

Elaine groaned and grabbed out her phone to text David. Her fingers were shaking too badly. She needed to talk to him instead. She raised the phone to her ear and froze.

Just before she hit call, she spotted it.

The overpacked Celica with the dog by the pump. Right in front of her.

“Matty look.” She pointed. “That’s the panhandler’s car. Where is he?” Her head swiveled, taking in the commotion. No panhandler.

Matty raised his left eyebrow in response. “What panhandler?”

That’s when everything clicked into place. “Oh my god oh my god! What did the gun man look like?”

“Holy shit!” Elaine clutched his shirt. “I saw him. I mean I think it was him. Over there.” She gestured to the empty row of gas pumps. “Going up and down the rows, asking people to buy him gas. Before I came into the store.” She stopped talking, eyes wide.

“Fuck. I know.” She rubbed her forehead. “But how long are they gonna make us stay here?”

“I don’t know.” He shook his head, frowning. “Dave is your brother-in-law. I’m sure he will understand…”

“And my boss.” She frowned, watching the wiggly black terrier poke his little head out the window. His shiny eyes caught her, pink tongue dangling. He panted, letting out a scrappy little bark. “Matty, what do you think is going to happen to him?”

“The panhandler who’s maybe the gunman? Oh, he’s going away for a long time. Probably forever. All these shootings lately. He’s like a serial killer now.”

“I thought you said the shooter didn’t kill anyone.”

“Only because he’s a bad aim, maybe.” Matty shrugged, saw the scruffy little terrier gazing mournfully in their direction that had caught her attention. They looked at each other. “Shelter probably.” Matty shook his head. “I’m sure he’ll be okay…”

“Elaine, Elaine…” David was yelling from the phone in her hand. Oh shit, I pressed call. She sighed with resignation, put the phone to her ear and started walking toward the hornet’s nest of cops.

← Nebraska Dancing in the Rain →