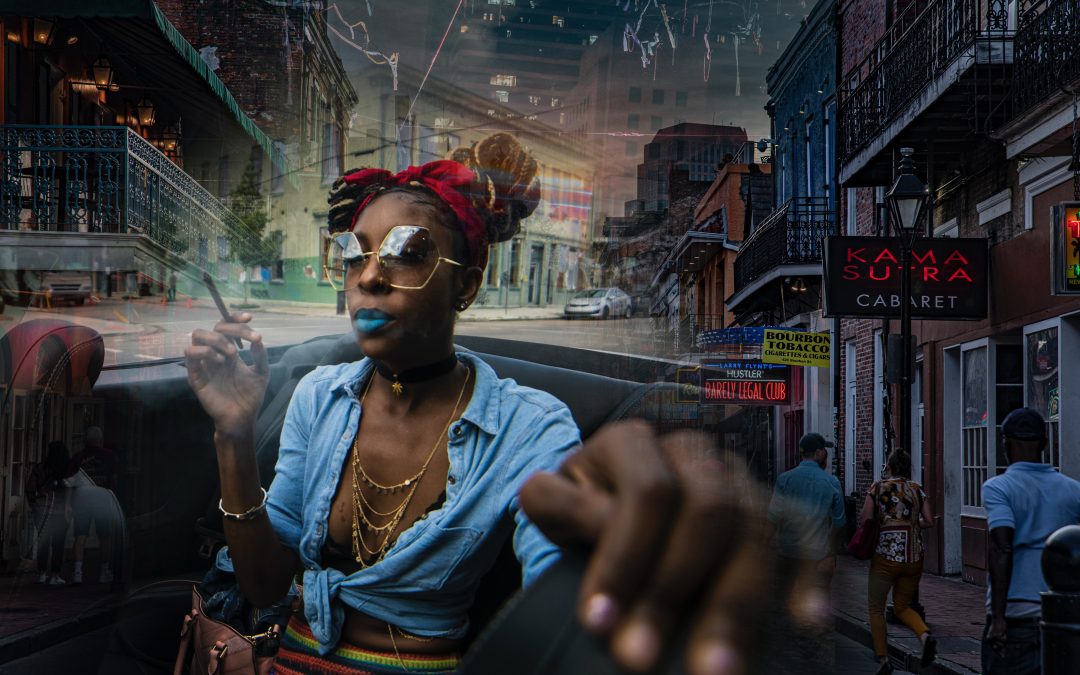 Housed in a former brothel, The Monkey’s Den in Tea Alley had been a thriving underground bar in the Marigny for decades. It looked like a tiny hole in the wall bookstore on the outskirts of the French Quarter of New Orleans. A throwback to the risqué days before prostitution was made illegal in Storyville, the door was marked only with a single bulb, casting an eerie blueish glow.

Hank pushed open the door, greeted the cashier by name. Shannon wore glasses with amber tinted lenses and indigo lipstick. “Normally, I’d make you buy a book for the cover charge, hon, but the place is dead tonight.” She stood and pulled a lever. A bookcase next to the magazine stand swung open to reveal a steep staircase taking them up through a narrow corridor.

Atop the staircase, a room unfolded like the swirl of a burlesque dancer’s skirts. A giant chandelier lit walls lined with liquor bottles, bookshelves crammed with everything from Tolstoy to Ram Dass. Vintage mirrors in gilt frames rubbed elbows with harlequin sepia photography of Storyville’s heyday. Leather sofas and booths surrounded a marble bar and frothing fountain. On most nights an intimate live jazz band or a burlesque show played, but not lately.

The bartender, wearing suspenders and a paisley bow tie loosened and undone, nodded when a couple of guys and a dame trickled in. Sporting an azure blue dot on his forehead, he slid behind the bar just as they sidled up.

Hank, Elaine and Matty stepped into a plush, exotic decor reminiscent of the roaring twenties. The aroma of cigars permeated. Plush, velvet couches, wood paneling, and tables made out of wine barrels. But the place was, indeed, empty.

“Can I shake you up a frothy Absinthe cocktail or would you prefer tableside service?” The pre-programmed greeting, delivered with a smokey voice, was normally conducted by a staff of 1920’s-style waitresses wearing cigarette boxes. Tonight, was just Sam.

She welcomed them with a giant grin on her face, under the glow of the blue dot affixed to her forehead. The raw depth of her brilliant white smile was the first thing to notice. The blue dot struck Hank like an after-shock. After the necessary preliminaries were made, Sam introduced the newcomers to Max, the bartender, as, “my brother Hank and his entourage.”

Max left and returned with cocktails in a delicately hand painted tea set. “Would you like to pair this with a few small bites?” He set the teas on table. “Empanadas, stuffed tortillas, the ever-popular gumbo, etouffee or poutine, or something else from the tapas list?”

“All of the above,” Hank said, raising his eyebrows to a round of enthusiastic nods from Matty and Elaine.

Elaine nodded at the dots on Sam and Max’s foreheads. “Looks like it caught on.”

Sam nodded. Max shuffled off to place the order.

“You got any extra of those devices Sam?” Hank pointed to his forehead. “I’m thinking to get some for the kids and Betsy.”

Sam nodded. “I got a few spares, little brother. Anything I can do for my niece and nephew. We’ll make sure you get some before you leave. Where y’at?”

“Colorado, then Berkeley.” Elaine said, taking the question literally. “We’re on a work detail and ran into some car trouble. Hank was good enough to ride along with us, as a precaution, so our vehicle runs all right to deliver the samples.”

They sat sipping their teacup drinks. Gin, infused with cucumber and flower water, mixed with Kombucha.

“It’s a secret mission.” Matty finally said, glaring at Elaine. “We really shouldn’t talk about it.”

“Why don’t you give us a hint.” Sam folded her arms, glared at Hank, as if waiting for his recital to begin.

Elaine let out a long sigh, and set her teacup down empty. “Berkeley, California is where we’re delivering the bio samples for post-viral complications’ treatment development.” She held Sam’s gaze. “Patent is being pursued for this technology in big Pharma.”

“Well that’s quite an endeavor.” Max winked. “Our Sam, is herself a soldier in this fight against the COVID,” Max announced. He’d brought the food and a few bottles of wine. “The wine, from Sam’s cellar,” he said, filling glasses around the table, “not French, but suitable for this gathering, I think.”

“Bravo!” Matty clapped his hands, then turned to Elaine. “Anything else you want to add? Poo story maybe?”

“No Matty,” she said, without hesitation. “I’d prefer not to discuss our love life just yet.”

“Very nice,” said Matty. “I can see you’re cut out for this sort of thing.”

“I’m not much for games.” Elaine reached for her glass of wine, jerking it off the table with enough force for it to slosh dangerously close to the rim of the glass.

“Well, if we all lettin’ the cats out of the bags here, I was approached by a government man with a suitcase full of money to use the club for testing their new devices.” Sam reached up and pulled the blue dot from her forehead. “So, I threw a few exclusive parties, had folks dress up. Called it a masquerade and made everyone wear them, ‘like human mood rings’ I said.” Sam topped of her glass. “A COVID detection device. That’s what the man said. I’m still not sure exactly what they were studying or measuring, but I got to keep the money.”

“Aren’t you afraid you provided a petri dish for COVID?”

“No. New Orleans got hit hard in the beginning like New York did in the spring. The folks who came to my club parties was bound and determined. They were going to catch it or pair off with or without my help. At least this way, I made a little spare change to help ride out the storm.” Sam picked up a joint from a heavy amber tinted glass ashtray and lit up. “The way I figure it, this is more of a way to perpetuate the cycle, the underbelly of the whale. I think they just trying to get people together, the undesirables you know make it cool.” She puffed and handed the joint off.

“Thanks baby doll,” Max leaned in, a deep long sexy smile that shone against his dark chiseled cheekbones. “Should I go lock the front and turn the light off?”

“So business isn’t good, even with the blue dots?” Elaine reached for the joint Sam handed her, puffed out a ring of smoke. “They just started up in New York, but I hadn’t been yet.”

“It was for awhile, but fell off with this second wave.”

Matty frowned, looked at the platinum encased jewel on the table, picked it up and studied it. “But does it work?”

“Depends how far down the conspiracy rabbit hole you wanna go?” Sam lounged on one of the tufted leather couches. “Clubs and social world during this crazy time. They go underground like speakeasies, but sanctioned, so now the government can still tax socializing by authorizing these blue dots as a way to mingle.”

Elaine nodded. Matty leaned back and crossed his arms.

“Speakeasies already have the social, now the Fed got a way to make money with legal social activity as a front to underground shit.” She waved at her surroundings. “They can kill two birds with one stone…”

Hank shook his head. “What do you mean by that, Sam?”

“Right, so it catches on. With who they don’t like. People who don’t fit the brick in the wall sort away; gay’s, tranny’s, sexual deviants and drug users.” Sam stood up from the parlor in the middle of the club where they were sitting, opened a box, retrieved a baggie and some papers, started rolling. “People who think outside the box. In other words, us.” Sam sat back into the deep leather couch, picked up and dangled the Blue Dot on the table between her fingers. “And this ‘device’ is for shit.”

“This just makes people believe they safe when they ‘aint.” Sam tapped the spliff against the table, sat back and lit up. “Blue dots ain’t nothing but a placebo. When I was at Tulane studying psychology,” Sam inhaled, held her breath, “which is a pseudo-science at best,” she squeaked out a swirl of smoke. “There were all sorts of rules to follow for experiments-and this one-they didn’t do shit.” She laughed and stomped her feet, “Going on a green light, daddy-Oh…” handing it off to Max, her current crème de la crème. “All you dawlin’” she drawled.

“Just like Mexico,” Max inhaled, winked at Sam, “but cleaner.” He smiled held the spliff in Hank’s direction, winked at Sam. “Thank you, lady of the night.”

“You mean thank COVID.” Sam laughed. “Ain’t no customers and I’m not letting shit this good go to waste.”

Hank’s smirk vanished. He frowned, looking back and forth between Matty, who shrugged resolutely and Elaine, who took another sip of wine, waved her hand. Sam winked and handed her the smoke.

Elaine inhaled, leaned back and released a slow spiral of smoke. She righted her head, opened her eyes and smiled. She reached for her water glass. The ice had melted and her fingers left prints in the frosty glass after she downed half of it.

“This is quite the mission, I can see,” Sam said, suppressing a grin. “What about you, sweetie?” Sam wondered, as Elaine held the joint to Matty. “You up for it?”

Matty crinkled his brow. “I’ll sit this one out, still driving to wherever we’re staying tonight.”

“Nonsense,” Sam said. “Stay here. This place has rooms to spare.” She nodded toward the door they’d come from. “Go up the stairs till you get to an outdoor patio with a rooftop garden that hides it from the street below, get some fresh air on your balcony.”

“Beds already made up.” Sam looked at her brother. “Looks like you got a good gig. Now that the experiment ring is done, I’m going to have to close up shop again.”

“I got half a mind to hitch a ride with y’all out west. No better time for a road trip than right now.” Sam crossed her legs, sipped the straw to her seltzer water.

Elaine shrugged, “up to Matty, but I don’t see why not.”

“We have to stop in Denver first.” Matty said.