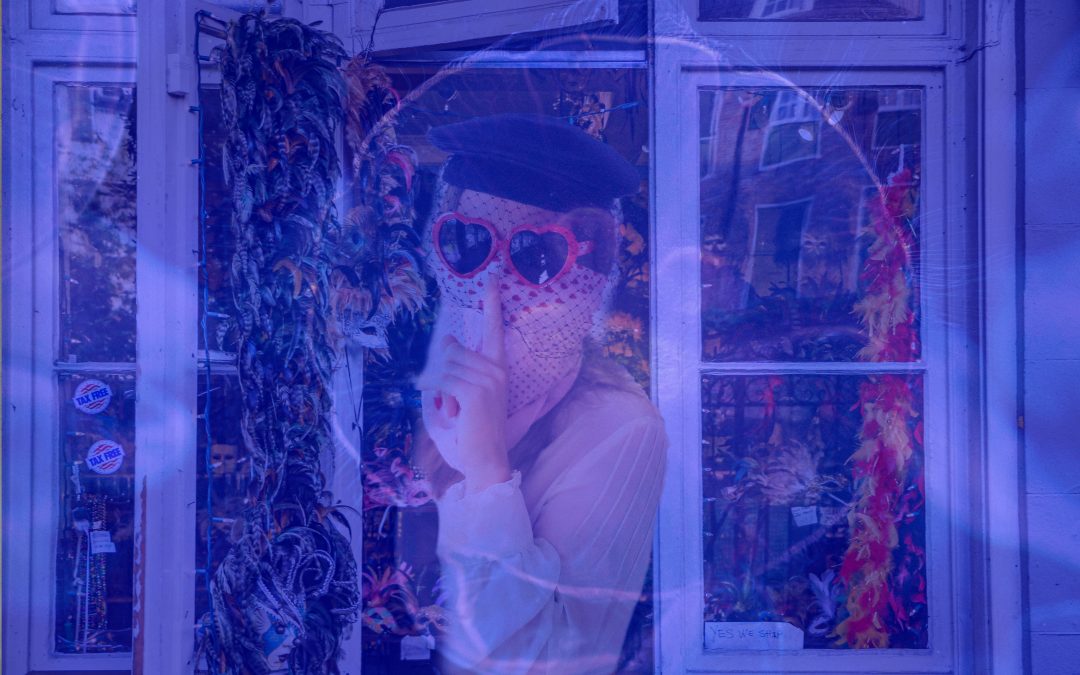 “Yes please.” Elaine watched Gertie smile up at her husband. David carried a tray of deviled eggs and a bottle of Prosecco. He set the appetizer down on the blonde oak table and poured three glasses.

The silver streaks in his ebony curls flashed in the late afternoon sun filtering through the windows of their sun-drenched kitchen. He leaned down to kiss Gertie. “Ladies,” David held up the crystal wine glasses, “a toast.” His deep baritone voice, a radio cadence that softly dialed all the right numbers, had surely helped his career as a top executive in the genetics department of the bio-tech pharmaceutical company Elaine also worked for, remotely.

Now, David was her boss’s boss, more on the political end of things rather than the scientific medical research minutiae Elaine was engaged in. If she hadn’t loved her sister so much, Elaine would be insanely jealous of her. A little less than a year apart, they were Irish twins. They’d been competitive about men, and had treated dating like a sport in their younger years.

“We’re still trying for a girl,” Gertie confessed when David disappeared outside with his glass and spatula for the grill. Elaine had introduced them, back when life was what you call normal. It was a whirlwind romance. Gertie and David had been married for five years and had two boys, also Irish twins.

Elaine shook her head, taking in her sister’s lithe frame, similar to her own, but with long blonde hair and half a head taller. “Well, you’d never know in a million years that you’ve got two already, so Mazel Tov.”

Gertie clinked glasses with her and took a sip of Prosecco. “Thanks sis.”

“Arf,” the family dog under the table chimed in. Gertie laughed, stood to rummage in the fridge and sloughed an already opened can of organic dog food into a chrome bowl in the corner. “Toto, here boy.”

“Goes down easy.” Elaine moved her feet reaching for the bottle to top off both their glasses. The brown and white beagle-terrier mix bounded over to his food bowl.

“That it does,” Gertie waved at David from the window. They watched him grill steaks outside and toss a football around with the two little boys in the yard. David’s swarthy complexion and lively brown eyes reflected in the little ones, under their blonde curls.

“They’ll darken as they get older,” Gertie said, following Elaine’s gaze. She rolled her eyes, picking up on the unvocalized thought. A trick she had played since childhood. “Yes bitch, they’re both his.”

“Well,” Elaine shot her a side long look. “Not everybody knows your checkered past and troubled youthful escapades as well as I do.”

“Only because you’re a part of most of them.” Gertie snickered. “Remember that roadhouse off the Garden State Parkway we used to play pool with the Hells Angels when we were in high school?”

“In Little Falls, yeah! How could I forget?” Elaine rolled her eyes. “I tackled you off the back of that hot Easy Rider’s bike when we found out he was going to Sturgis.”

Gertie hugged her. “You always had a head on your shoulders,” she said, “even back then. But I am worried about you. This pandemic shit alone in the city; that little escapade from last night… You might not get COVID from it, but you could get something else even worse.”

Elaine almost spit her wine out. “It’s not like I cut in on someone else’s tinder date all the time. Do you have any idea how fucked up the dating scene is right now?” She picked the glass up and swirled the bubbly white wine. “And my untimely break up just weeks before all of this lockdown shit started…. You know I don’t use these cheesy online dating sites. That’s a short dive into STD land.”

Gertie shot her a quizzical look. “Did you ever tell him your real name?”

“No Way!” Elaine burst out laughing hysterical giggle. “That’s the beauty of it! He’ll never know who I really am…but it’s a shitty thing to do! Sleep around on your wife. This confirms I will never use an app for a bootie call or date online.”

“I hear you there, sister. Scary stuff especially with all this crazy pandemic shit going on.”

“Anyone hungry?” David held a tray of steaks and burgers for the boys. Toto barked and skittered around his legs. The boys trundled in after him. Gertie grabbed the salad bowl and Elaine scooped up the wine.

They followed David and the boys to the dining room, a train of lively pre-pandemic-feeling Saturday afternoon lightness-of-being festivity.

That was about to be shattered.

David monopolized the dinner conversation discussing the company’s latest medical exploits. “Project Windigo started at our lab in Berkeley. The latest development is for a post COVID treatment for symptoms like brain fog, swelling and a whole host of biological issues. With all the pressure to have a vaccine, our funding is for the aftermath cure which is projected to be significant, especially with variants …”

Elaine stared outside the window at the golden crimson orange shades melting into the trees in the setting sun. She hadn’t seen colors like this in a while. The early fall foliage blazed in the backyard of aspens and maples. She was only half listening to David prattled on about work stuff. “… competitive. And I might add a golden opportunity…” Elaine sank into her golden, red-hot reverie of Matty’s love making the previous night. Too bad he turned out to be a cheating asshole. “… but we need it hand delivered by someone beyond reproach someone like Elaine here, if she’s up for it?”

“What?” Hearing her name yanked her back into the room. “Who? What now?” She almost choked on her steak, pounding her chest to break up the slip of attention. Everyone was looking at her. “Sorry. I was immersed in the foliage going on in your backyard, and quite taken by the magnificence of this perfect medium rare fillet mignon. It’s like eating an orgasm.”

Gertie shook her head, stood and went toward the kitchen. “More wine anyone?”

David nodded and winked at Gertie before turning back to Elaine. “We need to send some bio samples to the lab in Berkeley. The Windigo testing facility. The data and tissue samples cannot be trusted to a delivery service. It needs to be hand-delivered internally. We’ve hired a contract security company, but we need one of our employees to ride along. It’s for security purposes and it comes with a hefty stipend…”

“It’s the beyond reproach part that’s an issue. Competition to deliver the COVID-19 solution is fierce. No lie. There’s pirates out there…”

“Of the corporate variety.” Elaine set her wine glass down and wiggled her eyebrows at Gertie and the boys.

“You do realize that in unprecedented times such as these, the race for the vaccine is tied up in big pharma and government contacts. Us little guys are duking it out to contend with, or at least mitigate post-COVID illness and long-term issues. And I don’t mind telling you, it’s an intense global effort, with all the security and strategy of an arms race.”

Elaine nodded. Gertie topped off their wine glasses and left the bottle on the table, before she shooed the boys upstairs with promises of bedtime stories in return for clean teeth.

“It’s the beyond reproach part that’s an issue. The board has unanimously agreed that you are an excellent candidate to accompany the samples to the bay area. We have hired a professional security company, Blakeman, and are leaving nothing to chance.”

Elaine wrinkled her brow, an island unto herself. Her impression of being in possession of the bio samples that could ultimately stop the virus was overwhelming. She shook her head. “Wouldn’t it be easier to just fly up there?”

“Yeah, it would. But there’s a restriction on the charter flights these days and you’ve got to have a damn good reason. Needless to say, the government is privy to all the good reasons. The genetic material cannot be delivered by air as safely as by ground transport and it needs to get there.”

“Why not some kind of military convoy?”

“Again, the same reason it would be fairly obvious and we have limited control of what the current administration can do in force in demand. For all we know at this point they could simply take possession of our cargo at liberty. There’s no wiggle room here with federal anything, from commercial aviation to military support. They have sovereignty over everything.”

Elaine took a swig of wine, finishing the glass. Too much, too heavy.  “Are you sure you want me to do this Dave?”

David nodded and poured them another round.  “None of the Execs are off the radar, not even me. It’s too risky, Elaine. We need you.”

Tabitha moved with the precise destructive force of a tornado, packing and making calls. She’d spent the weekend texting back and forth from Eddie’s phone with Allison as they planned their ‘getaway.’

The streets were eerily deserted for a Monday. She walked a few blocks from the bank. Everyone she saw wore a mask. It was surreal and depressing at the same time. Moving money was easy. She called in several prescriptions to be filled. Tabitha cleaned out their joint bank account. Now her stash of cash was augmented. She would need it.

At Penn station, she bought a ticket at the window on the Ethan Allen Express to Vermont. Half-way home, she was studying the city skyline wondering if there might once more be birds in the sky over Manhattan, when her gaze fell onto a storefront window. She laughed into the empty soulless echo of the day.

Tabitha darted across the empty street to the drug store. She pulled out her phone and called. Please pick up. She sighed with relief a few moments later when the door cracked open and the woman inside handed her a bag. The bag contained a black short haired wig and a syringe. It also contained Percocet, Etorphine and gamma hydroxybutyric acid. As promised, Tabatha handed her $500 in crisp bills.

Back home, she checked the bags to make sure nothing was missing. She opened the brown plastic bottle containing the Percocet, took two. The suitcase was packed, lined with some of Eddie’s leftover industrial grade plastic. She frowned. The soft guts and organs would be disintegrated with common household products, but it wouldn’t make sense to cart them onto a train.

Tabatha opened the freezer to see what could be made easily. Tomato soup and lentils. She put water in a pan, added the frozen leftovers and heated the stovetop while she went over the plan.

Babe? He called her babe. Is it something he called all his extracurricular women on the side or just this one? Tabitha stirred. She swirled the water with the plunger, trying to circulate the hydrochloric acid into the last flashy stumps bobbing in the swampy brownish red soup. Maybe he didn’t like the name Allison. It’s a stupid name she probably got called Alley Kat all the time.

The plans morphed and fermented like a festering, rotted animal in the woods, taking shape and turning thundercloud shades of dark and foul by the hour. Allison was ripe for the trip. Tabitha fueled the fire by suggesting they delay, but meet for longer, the whole week…it worked.

Tabitha knew she was putting off the inevitable tidal wave of grief, the unavoidable tsunami of guilt with the hurricane force of her jealousy. But it felt so damned good to have a plan.